On the 20 July 2019, Kolej Yayasan Saad sent a team consisting of three students, Muhammad Irfan, Iqbal Azizi and John Lim, to the 5th Science Discovery Challenge Semi Finals held at the International Medical University, IMU. The competition tested participants on various questions from the form 4, as well as the form 5, Science syllabus. It includes Biology, Chemistry, Physics and Mathematics. Before the semi finals, students from all over Malaysia had to answer an online Science quiz. Only after being the top 10 percent of the whole competition, the team would be chosen to be one of the semi-finalists.

While we were there, our team also met a KYSER, Hari Prahlad, who is representing KYUEM. Fun fact, Hari won first place for the pre-university category.

After the opening ceremony, we went directly to the lecture theaters to have our semi-finals. We were given an MCQ sheet to fill up our answers. Forty questions were displayed on the projector and we had 1 minute to solve each question. After the stressful period, we were given 3-hour break to give the organisers time to count the scores. During the 3 hours, Iqbal, John and I attended a lot of workshops.

The workshops were medical themed. We were taught about Chinese Medicine, chiropractor and pathology. All of these were incredibly fascinating and mildly entertaining to see. When the break finally ended, it was announced that Kolej Yayasan Saad managed to be among the Top 20, making us eligible to compete in the grand finals. Unfortunately, it was proven too difficult for the team, making us unable to grasp the champion’s trophy.

However, we did not go back empty-handed. Our team managed to get the ‘Best Biology Award‘ in the end. All of us went back feeling satisfied, with me being more determined to go again next year and try harder. Knowing that a KYSER can win the overall champion, why can’t a KYS student do the same? 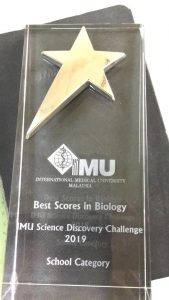 A Recap of SPM Tips by Top Scorers