At the time of this writing, the Sri Lanka presidential palace was stormed following weeks of civil unrest, Boris Johnson, Prime Minister of the United Kingdom just resigned and Shinzo Abe, former Prime Minister of Japan was assassinated marking critical moments in history.

The turbulent world of politics while may be distressing, would intrigue some, in particular, Thaqif Aris a student in Gonville and Caius College of the University of Cambridge. He reads history and politics.

From attending Kolej Yayasan Saad (KYS), a renowned boarding school to attending the University of Cambridge as an undergraduate student, Thaqif gets to learn the intricacies of history and politics from the best educators in the world.

Gonville and Caius is the fourth oldest college in the institution dating back as far as 1348. The alumni consist of 15 Nobel prize winners, second to only Trinity College, Cambridge.

After graduating from KYS, he attended Kolej Yayasan UEM (KYUEM), the premier A-Levels institution in the country. In an interview, he accredited his character development to these institutions. Both being boardings school attended by the nation’s most talented youngsters, he realised that he was constantly surrounded by peers who have strong sense of camaraderie and ambition.

Being the son of an Oxford alumni and attending schools with excellent academic records since the age of 13, he believes it is crucial to have a support system to navigate through challenges, may it be in studies or on a personal level.

Thaqif is well-known among friends and family to be active in extracurricular activities. Apart from school, he also writes for Mulazine, an independent publication by Malaysian creatives. In Cambridge, it is no different.

A day in the life of a Cambridge student

He starts his day as early as 6:30 am before going for his rowing training. The training ends at 9:00 am and then he would head to the library before attending a day’s worth of lectures and tutorials (or commonly known as “supervisions”).

Cambridge classes includes supervisions which are one-on-one sessions with your professor or a PhD student whose specialises in a topic of your course. In preparation for a typical supervision, Thaqif would write an essay about the topic, where it will then be discussed and explored deeper with the supervisor.

His day ends with dinner at his college’s “Hogwarts-esque” hall as he describes it. After dinner, he would either go to the gym or to the library for further revision.

Why did he choose this course?

Thaqif accredits his amazing lecturers back in KYS and KYUEM. In the latter, he described how Mr Wallace and Dr Cook, taught him that history is what you make of it and being critical thinking helps him in understanding the complexities of the world. This allows him to deal with a broad range of difficult situations better.

“…you will always find something new and interesting (in history). It’s as if you can fall in love with the subject over and over again because it feels like attending a different course each day.”

For politics, he has always been mesmerised by the developments in international affairs and his career goal is to be a barrister in human rights law.

The challenge being a Cambridge student

“A stereotype of Cambridge that I believe rings true is the amount of work that you do in comparison to your friends.”

Even with years of experience of setting ambitious milestones for himself in academics, he still finds it challenging to keep up with the amount of studying needed to thrive in the Cambridge environment.

By his second year, he realised that he needed to go easy on himself, realising that being too studious can be detrimental to health. It is important to have a good balance between studying and leisure to bring about the best in him as a student and as an individual.

Tips for those wanting to study in Cambridge

Figuring out what you want to do in life can be challenging. It is usually something we always ponder since school days.

Thaqif shared that one way to know it is by finding out what subjects interest you the most and why they matter to you as a person.

These questions will help you find answers and discovering who you truly are.

When the time comes, a deep understanding of yourself will immensely help in university applications, especially when writing your personal statement and going through the interviews.

“To aspiring students, do read on how Cambridge interviews their applicants because I think a key reason to me getting accepted was my interview.”

For those interested in pursuing history and politics, he recommends reading, following and discussing the latest developments in these two subjects. If a particular subject does not inspire, it may not be for you and learning it at higher levels will be a struggle.

For his personal statement, Thaqif wrote about racial politics and love in Malaysia and how it affected his perception of history and politics.

The highly experienced KYUEM’s university relations department also helped tremendously in the university applications. It provides a complete A-Z guidance in applying to top world universities including Oxford and Cambridge to ensure students have the best chance at getting in.

They also nurtured the students relationships with their desired universities by crafting personalised recommendations.

Most treasured experience in Cambridge

When asked about his most memorable experience in Cambridge so far, he reminisces the time he and his rowing team won a national competition in Nottingham.

He particularly appreciated the sense of esprit de corps in that moment. It was the gruelling hours he endured during training with his comrades in the early mornings that cemented that brotherhood.

“The closer you are as teammates, the stronger the boat becomes.” 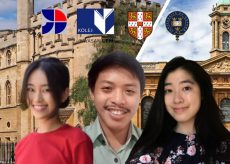 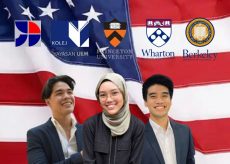 5 Things To Know About Applying To US Universities 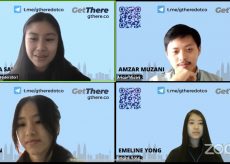 How to secure a place in Oxford & Cambridge