The Light in Darkness

Afternoons are the worst part of the day for anyone to attend a lengthy talk in the Great Hall. Not looking forward to another draggy speech, but being forced to attend, everyone including teachers dragged their feet into the hall at 2:15 PM, right after their lunch. What a great time to have a nap, eh? Never mind if they missed a class.

Today’s talk entitled “You Are My Inspiration”, was given by Datin Fauziah Mohd. Ramly, an activist for the disabled. With her were two youths who lost their sight when they were young. Khairul lost his right eye while playing rugby (the entire hall gasped) and later he lost his left eye as a result of his doctor’s negligence while undergoing glaucoma surgery. Dinie, who is more fortunate, is partially blind as a result of an unexplained disease. Both took turns to share their initial agony at the loss of sight, the challenges and frustrations they faced, and how they overcame negativity to live a “new” life. There was total pin drop silence as they spoke. A sense of empathy and sympathy for both men lingered in the hall, yet their sharing inspired.

After their sharing, Khairul and Dinie had a surprise for their audience. They belted out a song, and another at the students’ request. The kids went wild. We were awestruck by their music talent; Dinie has even cut his own album.  What began morosely ended with rounds of rousing applause from teachers and students.

What all of us can learn from this inspiring event is that when God takes something precious away from us, it is not because He is punishing us for our sins, but He wants us to trust Him, and believe that He has something better in store for us. Khairul and Dinie’s presence is the testimony of that. 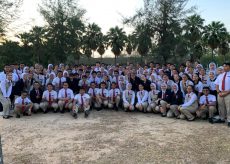 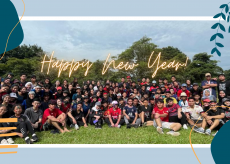 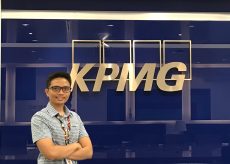